A Division of the International Studies Office

This course is intended for students who are already familiar with the Spanish language. Thus, the course will increase the student's vocabulary and improve his mastery of langu 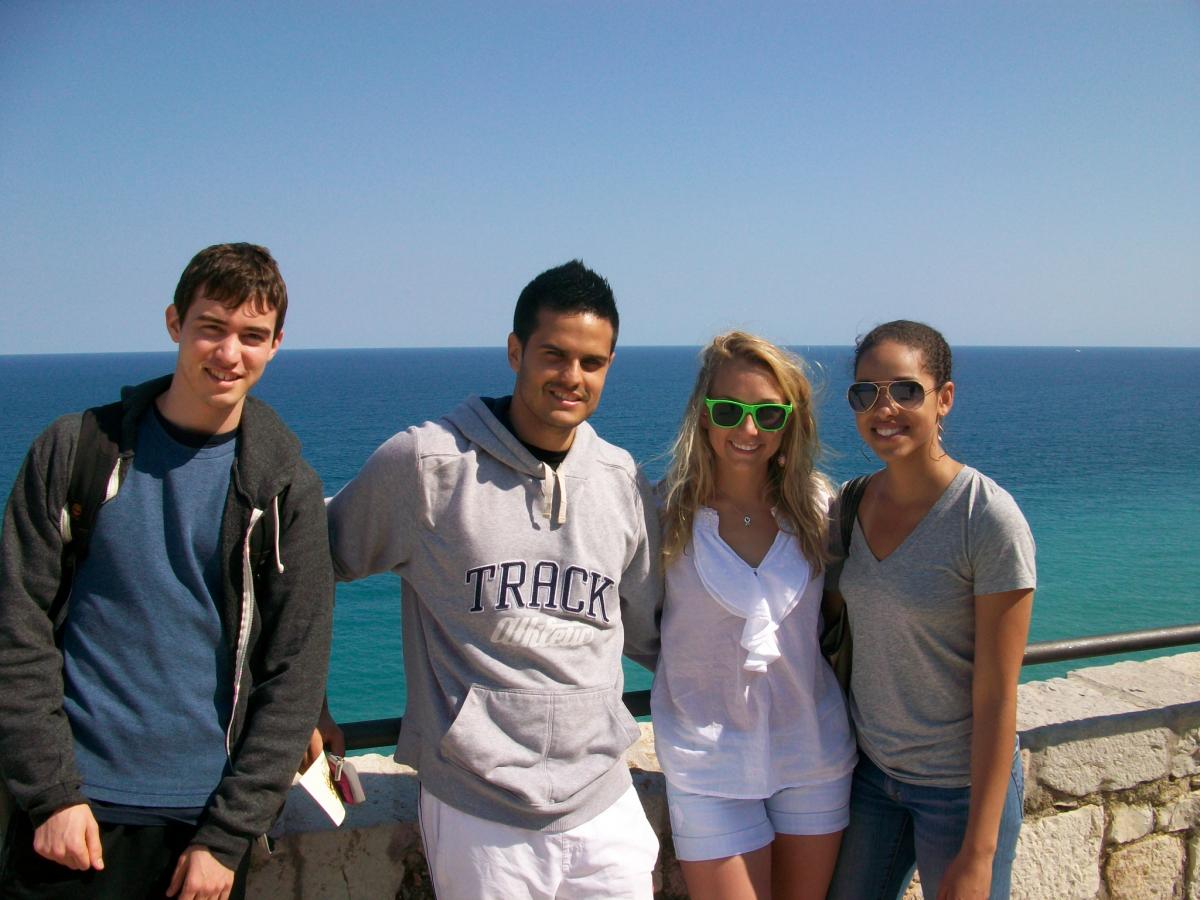 age skills in each of the following areas: listening, speaking, reading, writing. In addition, the course will provide each student with the opportunity to review important grammatical areas.

For students who have completed 2010 or an equivalent Intermediate Spanish course.

SPAN 3010-Grammar Review and Composition I

This course strives for a deeper understanding of grammatical aspects of the Spanish language through an intensive review of the main forms and uses of "ser" and "estar", simple and perfect verb tenses, pronouns, prepositions, passive voice, imperative, subjunctive and indicative/subjunctive contrast. It is assumed the student has a working knowledge of the mechanics. Though this course is a review, it is intended to increase the student's skills in reading, writing, listening and speaking in preparation for work in upper-level courses.

This course is intended primarily for students with some background in grammar and syntax. The course presents the student with a variety of practical situations to improve communication in Spanish. Oral presentations about cultural and social Spain, current readings, and quotations by famous people, debate, and acquisition of new vocabulary and expressions. The final grade will primarily be assessed on the quality of class participation and weekly class work.

This is an advanced Spanish course recommended for students with a solid background in Spanish. It focuses on the use of Spanish business terminology concerning business organization, management, banking, real estate and equipment, human resources, products and services, marketing (buying and selling, storage, transportation and advertising) and foreign trade. It also deals with the fundamentals of practical commercial Spanish correspondence and documentation. Other important aspects of the course will be studying Hispanic countries' commercial behaviors, and their present economical reality.

This course is designed for students planning to work in the health care field and who want to develop fundamental written and oral skills and vocabulary for the assessment of Spanish speaking patients in a variety of settings. Students will gain familiarity with non-technical and semi-technical functional vocabulary, along with idiomatic expressions and situational phrases that are used in medical Spanish. Medical language skills and cultural competency for health care situations will be developed as well as a review of important grammatical features

The course will focus on analyzing contemporary texts in prose, poetry and drama, all representing main tendencies, and showing the social atmosphere of the moment. This course will provide beginning Spanish majors and other interested students with the basic terminology and concepts involved in textual analysis. Practice in writing analytical essays and examinations on literary topics will prepare the student for more advanced courses of Spanish and Spanish American literature.

A survey of Spanish texts and authors from the beginning of the Enlightenment to the contemporary period, that shows the complexity of the cultural and social life in Spain during this important period, the paths that historical facts such as Spanish Civil War left in the literature and the evolution of Spanish diversity. We will study literary movements such as Neoclassicism, Romanticism, Generation of 98, and Modernism, Generation of 1927, post-war and post-Franco literature.

This is a survey of Latin American literature in the 20th century. It will deal chronologically with short stories, poetry, and a few essays. The aim will be to provide a general introduction to the study of modern and contemporary Spanish American literature, its main periods and movements and its major authors showing its richness, diversity and complexity. We will read a selection of authors coming from very diverse countries and cultural environments, among others, Gabriel García Márquez, Julio Cortázar, Juan Rulfo, Luisa Valenzuela, Joge Luis Borges.

SPAN 4040-Translation from Spanish to English

The aim of this course is to explore the general principles and the practical techniques of translation from Spanish to English (sometimes from English to Spanish) by discussing and translating examples drawn from a wide variety of registers. Colloquial, general, literary, and technical texts will be translated and commented on during the course. The final grade will be assessed not only on the basis of exams, but also on weekly class work and the quality of class participation.

This course intends to inform the student of the peculiarities and traits that define and have defined the social, political, ideological, economic and cultural context of Spain on a national as well as regional scale. Using a historic-political reference, an analysis will be made of the points that best define Spanish cultural reality: festivals, bulls, music, gastronomy, art, etc…., which will allow the student to passing precise coordinates to this reality beyond preconceived ideas and stereotypes.

Mass media, especially those based on images, are very important nowadays to create, modify and empower cultural communities by providing signs of identity and topics to discuss inside the community. Studying media is a very good way to discover how today's Spaniards think about themselves and others, since media simultaneously influence and reflect those images. This course starts with background on the history and structure of the media in Spain, discussions about some multimedia texts to discover how they work and find out relevant information about Spain in different levels of reading: implicit ideologies, roles of men and women, current controversies, Spanish identity vs. regional identities, the influence of opinion lobbies, images of USA.

Spanish art is considered one of the richest and most important examples of Universal Art. Its heritage is made up of works that range from pre-history with the Altamira caves, to the great figures of the 20th century such as Gaudí, Picasso, Dalí and Miró; passing through the rich architectural examples left on the Iberian Peninsula by the Romans or those of the medieval Gothic with their sumptuous cathedrals and castles; or the Golden Age painting with artists such as Velázques, El Greco, Murillo, and Ribera among their ranks.

If we looked back on the 20th century from the vantage point of the present, we would define it with just one word: Picasso. This artist was capable of transforming all the art of his period, showing us a new way of looking at reality and the world. Through the different artistic styles that the artist either developed or assimilated, the course will help us understand this new reality and see the world from a different perspective.

* In courses with two or three possible nomenclatures, the student will be able to choose only one.